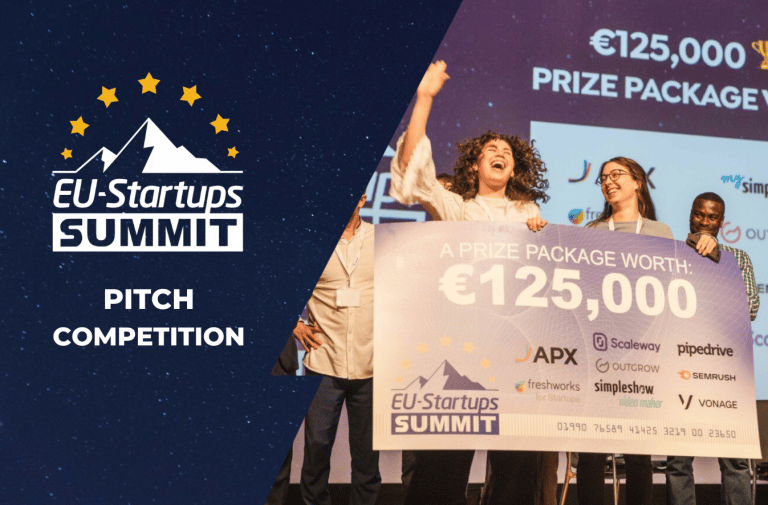 On April 20-21 this year’s EU-Startups Summit will take place in Barcelona! It is an annual flagship event will gather over 2,000 founders, startup enthusiasts and investors for two exciting days of networking, inspiration and learning.

The agenda will feature some of Europe’s most successful entrepreneurs of our time. There will be two stages, great networking opportunities, workshops, a buzzing exhibition hall, and a super exciting Pitch Competition featuring 15 of Europe’s most promising early-stage startups!

The goal of our annual Pitch Competition is to showcase Europe’s very best seed and pre-seed startups out there! The application phase opens NOW and will close on February 15th. Apply here today!

The 15 finalists who will pitch on the main stage at this year’s EU-Startups Summit will be announced at the end of February.

The Prize Package for the winning startup will be worth more than €100k in total. Here are some of the prize package items already confirmed today:

The selected teams will get a valuable feedback from a jury of well-known venture capital investors. The jury members will be announced by the end of January. Aside of the VC jury, we’ll have over 350 other investors (VCs, accelerators, business angels) who will be part of this year’s EU-Startups Summit. Many of those will follow the pitch competition and you can do active networking with them during the event.

If you’d like to pitch your startup at the 2023 edition of the EU-Startups Summit, you can apply here today. Applications close on February 15th!

The process: After applying via this link, we will carefully sift through all of the applications and hand-pick the 15 finalists who will join us on the main stage at this year’s EU-Startups Summit on April 20-21 in Barcelona, where they will pitch for 3 minutes in front of our jury and a huge audience of investors, media, and startup enthusiasts.

Precondition: Your startup should be in pre-seed or seed stage, not older than 2 ½ years, should have raised no venture capital yet (or less than €500K) and has to be based in Europe (EU plus UK, Norway, Switzerland, etc.).

Timings & Tickets: The EU-Startups Summit will take place on April 20-21 in beautiful Barcelona. In addition to the Pitch Competition, there will also be many more highlights, which they are now announcing on a weekly basis. Tickets are available here.